With hot, itchy sweaters layered over our Christmas clothes, we lined up to model our ugly sweaters so the voting could begin.  Those that didn't wear a sweater (mostly the men-but Brad did wear one and opted out of the contest because he decided a pilly sweater just didn't qualify) got to vote for the "Ugliest Sweater".  The question everyone asked was, "What's the criteria?"   We had none.  I suppose we could have spent hours searching online to see what others considered the criteria to be, but we just told everyone to vote for the one they thought was the ugliest.  Some ugly sweater creators (Mom and Ro) went above and beyond ugly and had to attach lights and sing, "We Wish You a Merry Christmas!"

Here's a preview of the other sweaters.  Can you choose a winner?


If we do it again in 2013, maybe we need to call it something else. I don't know: tacky, creative, festive, hideous, obnoxious...What do you think?

Posted by Kim Oldenburgh at 2:19 PM No comments:

A Day in the Ocean with a Maine Lobsterman

My nose hairs immediately froze when I stepped out the front door.  I quickly forgot about the cold as we ran into the old garage to grab the runner sleds.  We each grabbed a rope handle and trudged through the snow banks to cross the road to our favorite icy sliding hill over at Old Lady Haskell’s.  It took us forever to get to the top.  Rodonna would be almost there, then slide back and knock Karen and me down like dominoes so we had to start all over again.  By the time we got to the top, we were toasty warm and ready for a full day of sliding on the runners.
Rodonna went first.  She was the oldest of the three of us, so we always let her go first.  She sat on her sled and placed her feet just right so she could steer the sled.  We watched from the top, as she became a blur on the fast ice.   She nailed the bottom turn just as we had all mapped out at the top.  “Yes, that was a blast,” she screamed from the bottom, “I’m doing it again!”
Next it was my turn.  I thought it might be safer to lie on the sled.  Karen held it while I positioned myself perfectly:  belly on wooden slats, legs bent at the knee so my feet were up in the air and my mittened hands grasping the handles for dear life!
I yelled, “OK, let go”, and I was off.  I was flying down that icy hill.  I was flying out of control and I couldn’t think.  I was flying so fast I started screaming and just closed my eyes and let the sled take me for a ride.  My belly was tickling and I know I was smiling through my screams.   That’s how fun it was at that very moment.  The fun didn’t last.  As I approached the bottom, I heard Karen yelling from the top, “Go left, Kim, go left.”  Just as I began to turn my handles to the left, I opened my eyes and right there in front of me was the pile of lumber that we all had planned to carefully to avoid.  I didn’t even have time to plow off my sled.  I ran smack right into the lumber pile.  I screamed again, but this time it wasn’t a scream of joy.  It was s scream of pain.
My face felt wet and I wiped my mitten across it and saw blood all over my mitten.  Rodonna reached me first and said, “Oh no, mama’s gonna kill us!”  Karen approached and said, “We’ll just clean it up and she’ll never know.”
Karen washed all the blood off my face with snow and Rodonna made me an ice pack with her mitten.
For the next few hours, I was a queen sitting high on my sled pedestal, while Rodonna and Karen took turns pulling me around the lumberyard until we thought it was safe enough to go home.
We didn’t take anymore runs down the hill that day and my face was all puffed up, but we went right back out to he hill the next day and I never hit that lumber pile again!

Today's assignment I'll attempt:  Write that scene from a completely different point of view.  I am going to write this story from my sister, Rodonna's, point of view instead of mine.

I flew down the icy hill in record speed, grabbed my rope and began dragging the runner seld back up the hill to do it all over again.  Karen was at the top holding the sled while Kim was getting into position.  What on earth was she doing?  She was laying flat on her belly on the sled with her legs, bent at the knees, sticking up behind her.  I heard Karen counting down just as I started yelling, "Sit up, you idiot.  Don't go down on your belly!'
"....2, 1..." Karen yelled and let go of the sled and off Kim went.  She was flying out of control and I knew what was going to happen before it even happened.  She began to rapidly approach me on the hill and I could see the big smile on her face slowly disappearing as she sled begin going down the hill with a mind of its own.  She closed her eyes and I knew right then, it was over.  I stopped on the hill and watched her go down.  Karen's screams of "Go left, Kim!  Go left!" couldn't be heard over the sharp runners cutting into the ice.  At that moment, time froze.  Kim flew right into the lumber pile we had all planned to carefully to avoid.  Before the blood curdling screams came out of Kim's mouth, Karen came sliding down the hill on her bottom but I was closer, so I got there first. She was laying comatose on the sled and I thought she was dead until I rolled her over.
That's when I saw blood all over her face. She picked up her mittened hand and wiped the blood off her face and that's when I said, "Mama's gonna kill us!"
The wise one of the bunch said, "She'll never know, we'll just clean her all up and mama will never know what happened."
Karen washed all the blood off Kim's face with snow while I made her an ice-pack with my mitten.  For the next few hours, we dragged her all over the lumberyard until the swelling had gone down enough to go home.
The next day, we all went back to the hill and Kim never ran into that lumber pile again!

Posted by Kim Oldenburgh at 2:29 PM No comments:

Author: Julie True Kingsley.  She tells us to find the character within by closing our eyes and envisioning a well-rounded, complex, flushed out character we know.  Think about the character in our own story-is it well-rounded? Probably not.  Julie suggests using mixed media to create our characters and their story.

Step One:  Look for faces in magazines that call to you. Choose one.  (If you already have a character, you can sketch your character they way you imagine they look.)
Here's Jim taken from a Fitness magazine advertisement for Honda: 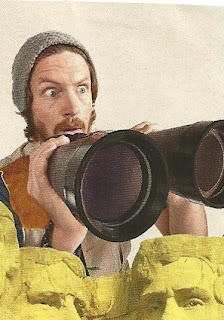 Physical Traits: Blue eyes, beard, mustache, athletic, thin, in his 30's, starting to bald so he hides it with a hat
What is Jim thinking? Jim is shocked by what he's seeing.  He's also curious and wants to know more.
What makes Jim's heart tick? He likes adventures, climbing high and living on the edge of death.  What really makes him tick is his secret.
Jim's Secrets: He has many.  He works for a major film company documenting sporting events, but he secretly wants to be the athlete, not the cameraman.
He always wanted to be a naturalist as he has a secret passion for birds.  His parents wouldn't support him in college if he went into that field, so he settled for media.
He still lives with his parents, but on weekends and while he's "away on assignment",  he's really at a cabin in the woods his parents don't know he built. There he nurtures and cares for the many bird visitors he receives.

Step Two:  This was hard for me.  What song would speak to the "secret Jim"?  I didn't have one in my head, so I had to take a break for a while and just think about Jim.  I came to this one. (Funny about this song, I've used it in another writing project, too.)  The World Ain't Slowing Down by Paul Ellis.   Jim's life is passing him by and if he doesn't follow his passion, he might be stuck where he is and doesn't want to be.
Step Three: Start this character's story.  Keep the music playing, put the beat into your writing, see what happens. Does the beat find its way into your words?

Here goes:
Jim shut the door of his Toyota Truck, put the key in the ignition and let out a big sigh.  He looked in the passenger's seat at the lunch sack his mother had packed him that morning, just as she had when he was younger going off to school.  Back then, he really went where his mother thought he was going.  He took his hat off and grabbed his balding head with both hands and clasped them behind his head and looked straight ahead at this house he'd lived in since he was born, the house he'd lived in for 30 years, the house where he lived one life, but secretly wished to live a very different one.  He drove out of the drive and headed towards his paradise but couldn't shake the strange pit in his stomach he was experiencing for the first time.


Posted by Kim Oldenburgh at 10:41 AM No comments:

Today's mini-lesson was brought to us by Ruth McNally Barshaw, author and illustrator of Ellie McDoodle.  She discusses how important it is to sketch out your writing work with illustrations before you begin writing. These words resonate with me: "And if you want to write better, draw first."
Her drawing ideas are as follows:
"To use this idea with students:
-Have them draw storyboards of their work. Or their fellow students’ work. Or stories they have read.
Storyboarding is used in advertising for developing commercials, and in filmmaking. Limiting them to 6 or 8 small boxes for the entire story prevents minutia or perfectionism from creeping in. It solidifies pacing and focuses cause and effect. (Illustrators storyboard their picturebooks, one box per page. I do this, but I also storyboard my novels.)
-Tell them to close their eyes. Visualize the character they want to write about. Then draw what they see in their mind’s eye, their imagination.
-To add depth to the drawn character, add callouts to describe various personality and physical traits. Brainstorm negative as well as positive traits, for a more rounded character. Next they write a story using what they have drawn."
Here's my attempt at drawing a picture of my frustration with biking lately.  I am a fit person and am very tough on myself when I don't live up to my own fitness expectations. Lately, my bike rides have been very difficult and frustrating for me!  After a 24 mile ride yesterday, I felt like this: 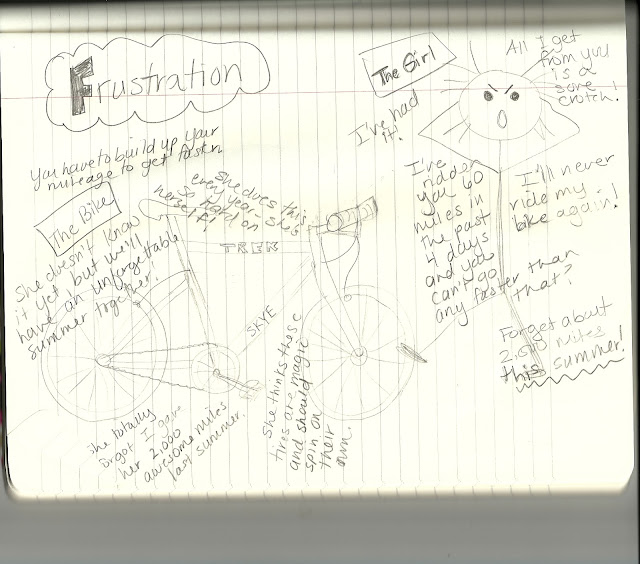 After drawing and letting my bike "talk to me, I already feel better and if it's not still raining out tomorrow, I'm going for a ride!
Posted by Kim Oldenburgh at 7:17 PM No comments: